Building a legacy with legend Sörenstam

During his five-year tenure as Group Executive Director at Mission Hills, Iain Roberts worked closely with 10-time Major winner Annika Sörenstam to raise the profile of her signature Annika Invitational. Launched in 2011 as China’s first and only all-girls event, this annual tournament brings together Asia’s top juniors to play on the Sörenstam-designed Annika Course at Mission Hills Dongguan. The Swedish legend always attends the event to meet the players, give a skills clinic (see picture) and present trophies at the prize giving. Scores in the Annika Invitational contribute to the China Golf Association’s Junior Rankings and are factored into the World Amateur Golf Rankings.

Over the course of her 15-year Hall of Fame career, Sörenstam rewrote the LPGA and Ladies European Tour record books, won countless awards, and changed the way women’s golf was played, viewed and covered. She amassed 89 worldwide victories, including 72 on the LPGA Tour. She captured a record eight Player of the Year awards and still holds the record for the lowest scoring average in a season – 68.69 in 2004. She remains the only female to break 60 in an official event. 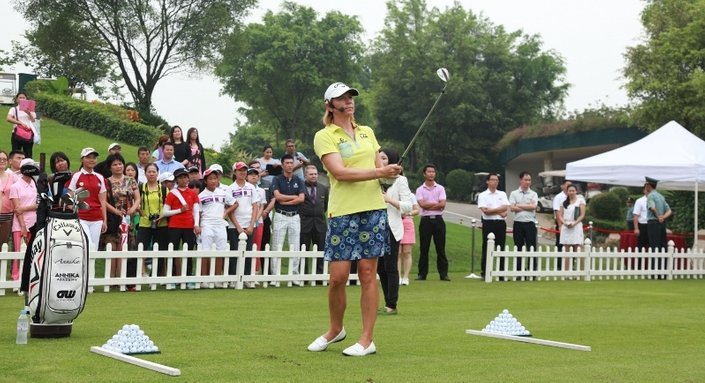